Yesterday I witnessed the largest display of public mourning I have ever seen. Thousands gathered at Kasubi, the burial site of four Buganda kings, to mourn the fiery destruction it endured last week. The New Vision printed estimates of the crowd at 100,000, but I’ve been in a crowd that large before and this was much bigger. There had to have been 100,000 in and around the Kasubi quadrangle alone.

Although both the Vision and the Monitor printed stories this week on the kingdom and the government beefing up security for the Friday prayers, the last day of mourning and the most public commemorative event yet at Kasubi, these forces managed to keep the situation just barely within control. Two died and more than 150 were injured, but considering what I saw yesterday, these numbers represent security blessings.

Along with three friends, I weaved through the crowds up toward the front near journalists and ministers of parliament. 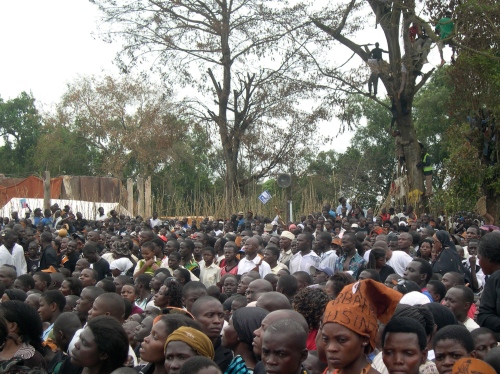 There people pushed, shoved, shouted, sweat, fainted, climbed the trees, mourned and sang as security guards from both kingdom and government blew futile whistles and waved threatening batons at the throng. When the Kabaka showed up, it was difficult enough simply to stand up, much less see him and his entourage. The lucky few who caught a glimpse spurred a huge roar from the crowd before succumbing to waves of rowdiness and returning to the task of avoiding a fall.

What I didn’t realize until after the Kabaka left was that the logistical problem with this crowd was singular and fairly simple: this was a parade forced into a space where it could not realize its desire to move. The crowd cleared out of the enclosed stagnation to march through Nakulabye back to Mengo, where it eventually dispursed.

This physical expression of political desire for movement and change has people talking. For now I think we can simply be happy that, for the most part, things didn’t get too out of control.

No pix on this yet, but mourning has been ongoing in Buganda. People continue to visit Kasubi and tomorrow will bring more functions there. Meanwhile, the whole city seems to be attired in some manner of bark cloth, and the Kabaka cries in unison with his kingdom.

Close on the heels of September violence in Uganda, fresh fears of conflict between Buganda and Uganda’s central government now dominate the evening news on every channel here in Kampala. It’s not clear how the enormous blaze began at a UNESCO World Heritage Site called Kasubi Tombs last night, but the Daily Monitor reported this story on the front page today, quoting officers and other people who suspected arson.

Of course people suspect arson. Of course they want to start rumors about how the central government maliciously burned down their ancestral burial place. These things are not surprising in a country where the president has been in power as long as Museveni has, especially if that country also has politically flaccid monarchies jostling for prominence. But realistically, Kasubi residents kept fires dangerously close to an enormous grass-thatched hut, so accidental fire is also a distinct possibility here.

What concerns me much more than the cause of this fire is the willingness of Museveni’s goons to use whatever violence they want to when someone gets in their way. Mourners at Kasubi apparently crossed the wrong boundaries, resulting in the shooting deaths of two people today when Museveni went to survey the damage. Is this a foreboding image of things to come in 2011 elections?

Or is it simply another symptom of the violence that bubbles just below the surface of any politically charged situation? If the riots at Makerere University are any indication, it’s more likely the latter. A colleague and fellow scholar of Uganda suggested in November that the September rioting was more economically than politically motivated, and she showed convincing evidence to support that theory. Regardless, the availability of violent means and the willingness to use them, particularly on the part of security forces and presidential guard types, remains of grave concern.

For more on these and related stories, see my Delicious links (in the sidebar).

I haven’t posted much lately, and that’s because I have been too busy traveling.  In late February, I attended an annual meeting of Uganda n’eddagala lyayo (Uganda and its medicines), Uganda’s oldest association of traditional healers.  The group entertaining the crowd that day was led by one Nakayima, a singer who has since become my dear friend and close research consultant.  She has been an excellent travel guide for some of Buganda’s historically significant ritual sites.

This weekend, I begin recording some of her vast repertory of ritual songs sans drums and rattles.  That technique has worked well for me before as a means of getting a clear rendering of the song texts, so I am excited to begin.  In the mean time, I hope you enjoy these stories and images from our travels.

These places and their stories live and breathe in oral tradition, but this is a part of the world where people don’t depend on Jan Vansina to tell them that those traditions constitute this region’s historical records.  The characters and themes of those storied places appear in Nakayima’s songs as well.  By taking me to see these places and meet the people who take care of the shrines, she provides me with critical context for understanding her repertory of ritual songs.