There’s one field site where I go quite regularly because I believe the community there is among the most innovative religious communities in the world. Buwaali is named for the disease Kawaali because it is associated with a 19th century smallpox outbreak. Likewise the patron spirit of this place, Jjajja Ndawula, is associated with afflictions of the skin. His drinking gourd has raised bumps, as does his tobacco pipe. I wrote about the overall look and feel of this place in another post. Here I’d like to return to Kakooge village, to the place called Buwaali, and see what has changed.

When I entered the estate where Jjajja Ndawula Community have built there main shrine, I noticed immediately how many cosmetic changes had been made. Inside the newly installed main gate, the grass and landscaping had been totally redone.

The compound interior had not changed significantly, but there was one new spot in the midst of all of the various small shrines dedicated to different spirits: a group of mats lay beneath thick vines held up by a wooden pole frame.

Now the person I came with is a Muslim, and Ramadan was to begin that evening. A man soon came to this new place with his head covered, carrying a Qu’ran, a small ceramic portable fireplace full of burning coals, and waxy incense called kabanni. He sat down along with six or seven other people and began to recite suras as he placed some of the incense on the coals. For the next half hour, he alternated between sura recitation and Luganda prayers to ancestors and other patron spirits. The group grew, and by the end of the half hour prayer session, there were about twenty people seated there and responding to the prayers. Now it’s one thing for a Muslim to pray in a shrine, but quite another for a group to bring Qu’ranic recitation into the shrine space and to build a dedicated space for Islamic prayer.

At the conclusion of these prayers, the group disbursed to their various tasks. No Ramadan feasts tonight; just tea and dinner before the proceedings were to begin. We went into the main shrine, which had also changed significantly since my trip here in 2010. All of the windows had been installed, and the detailed painting around the trim had nearly been finished. 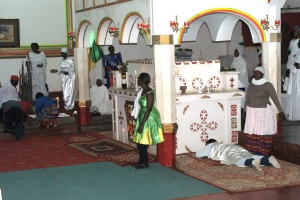 The woman prostrate in front of the shrine there is praising Kiwanuka as others look on, attending to the main medium of the place, Jjajja Ndawula.

As on other occasions, dancing and singing went on well into the night. I’m pleased to report that during the meeting that followed, the community agreed to let me deposit video recordings from this shrine in an archive at Makerere University pending their receipt of DVD copies for community viewing.

The proposal for my current research, “Music is the Method,” draws upon years of previous research to strongly suggest that musicking, spending time with musicians, and getting to know their repertories is a good way to understand how they live and what matters to them. It is also, in the context of this project, a good way to understand how people think about what it means to be ill and what it means to live well.

This part of the project seeks to return some of my field recordings to Uganda on a permanent basis. There the people who made them should be able to access them, and others will hopefully be able to use them for further research. It never ceases to amaze me how much time and energy it takes just to get and stay organized with this much material in hand (it’s not only my daily chore now, but sometimes I rope my wife into it as well). I’ve got audio, photographs, and video to contend with, much of which I’ve  annotated through fieldnotes, coding, and blogging. This project breathes new life into my efforts at collating these materials and making sense of them beyond the life of my now-finished dissertation.

My hope, bolstered by an encouraging first couple of weeks of this work, is that I can continue to connect these materials, get them to talk to each other, and organize an ever increasing series of cross-references. The contours of a kusamira repertory emerged well before I ever finished the dissertation. If I am to understand it well enough to comment on its relationship to creation stories and other folklore of this region in my book, this new archival effort will be a crucial step in that process.

I’ve been here enough times now that arrival always feels somewhat like a homecoming. I’ve only just arrived, so there’s not really much to report, but it sure is good to see old friends. More in a few days on the work once I’ve had a chance to get something done. For now it’ll be a cold Tusker for jet-lag recovery, thank you very much.

It is time to revive this dusty old blog, and a note from a current Fulbrighter in Uganda this morning reminded me of one reason why: it helps to create connections among the people I work with in Uganda (only some of whom use social media tools themselves) and my family, friends, and colleagues elsewhere in the world.

This summer, I’ll embark on an eight week journey back to Uganda with generous support from a UNCF Mellon Summer Research Residency Fellowship. Once there, I’ll be working with Dr. Sylvia Nannyonga-Tamusuza, the founding curator of the Makerere University Klaus Wachsmann World Music Archive and the director of that university’s ethnomusicology program, to reach out to the communities who facilitated some of the recordings that informed my dissertation research. I’ll be working with these communities to see how we might archive some of the audio and video recordings for further access and future research.

The e-mail I got this morning was a great excuse to re-connect with Ssematimba Frank Sibyangu. I had worked previously with him and had contacted him about working together again during this trip. The woman who e-mailed me is teaching on a Fulbright in Mukono District, where Uncle Ssema lives. She had seen my earlier post about him and reached out to see if she might take some lessons with him. Given that her Fulbright has just been renewed, I’m hoping we will all meet up once Ssema and I resume working together.

Meanwhile, I’m also planning visits to some other field sites that I’ve written about here in the past…if you haven’t been back in a while, if you’re taking my online summer course, or even if you’re just discovering this site, stay tuned!

The Work of Fieldwork

My recent silence has been a symptom of the nature of the work I’ve been doing here. But just because I’m not collecting recordings of ritual music or intriguing pictures to post here doesn’t mean that this part of the work isn’t important. In fact, it might be the most crucial part. Over the last several weeks, I have been spending time with a few key colleagues–experts on the music of kusamira spirit possession–who are helping me to transcribe and interpret ritual song. It’s not as exciting in quite the same way as all the travel and activity of going up-country to attend all-night rituals, but it’s facilitating a deeper understanding of this music.

What is very exciting about it is unpacking the multiple meanings of song texts, putting myself back in the spaces of events I only understood on a superficial level the first time, and trying to re-interpret those events based on local understandings of symbols and songs. This, for me, is the true work of ethnomusicological fieldwork; it’s the most challenging part, which also makes it one of the most rewarding parts. 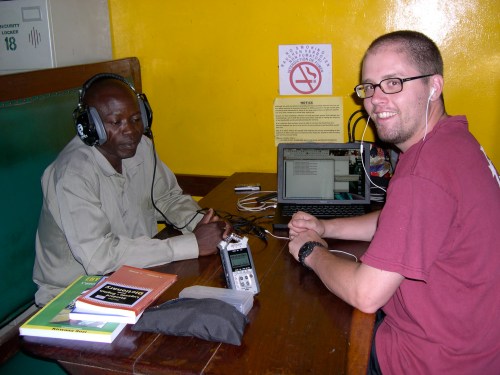 Above: My good friend and teacher Ssematimba, or “Uncle Ssema,” listens to a field recording with me.

Three and a half years ago, when I first came to Uganda, I had the honor and pleasure of being the best man to a couple of the sweetest Baganda I have ever met. They have been so generous to me over the years, as colleagues, teachers, and friends. One of the greatest gifts they have given me is to introduce me to other friends and teachers who have so much to offer.

One of the drummers at their wedding was the most amazing Muganda drummer I had ever seen. Three years on, he’s still the best I’ve ever seen. I now have the privilege of calling this man my teacher. Meet Frank Ssematimba.

“Uncle Ssema,” as his friends call him, has been playing with different music & dance troupes for a long time. I first saw him with Badongo dancers, a group that a famous musician named Ssalongo Deziderio Kiwanuka Matovu started years ago. Ssalongo didn’t perform with them that night, which is probably good because I would have been completely distracted by Ssema’s drumming and its connection to the wedding dances.

Now he plays with a troupe called “Nakifuma Super Dancers,” led by one Albert Bisaso Ssempeke. Albert is the heir of one of the best known Muganda musicians, another of Ssalongo Deziderio’s generation. This group he’s put together has the best percussion battery I’ve ever seen, led by none other than Uncle Ssema. I had occasion to play with them at a couple of events over the last six weeks or so, and at the second one Uncle Ssema announced to me that he was going to teach me mbaga variations on embuutu drum. How could I argue?

A week later, I start going out to Nakifuma, a dusty 90-minute ride east of Kampala, for drumming lessons. I find Uncle Ssema there, comfortable in the shade of a mango tree that graces his front yard near the road. He sets up a bench with a tarp in front of it on which we set the mbuutu. We begin with the only familiar thing that I’ll play in the lesson: the first of many variations for mbaga dance. He takes me through as many variations as my hands can handle that day, and then he plays a whole bunch more as if to say “you have a long way to go, kid.” But he’s courteous about it–not ruthless like some teachers.

Uncle Ssema seems to understand my process, and why it is I want to learn, and he likes it. When the little kids get in the way of my recording device, he gently nudges them away and we continue. They clearly love him, and they’re fascinated by this whole process. He’s only slightly more reserved about his own fascination, but when it comes to hearing the playback of our recordings, he doesn’t hide it. That makes for a very open process. Often when we’re finished with the drumming part, he’ll play a few tunes on his ndingidi, a single-stringed fiddle. There are a few really discernible styles on this thing, and his is much like his teacher, Deziderio’s. Even the way he sings is similar. It’s cool to see the next generation of Baganda musicians so eager to share their music. It’s a pleasure to listen and a privilege to learn with this guy.