Above and header: a classic image at Iowa’s Historic Arnold’s Park.

If I have been too quiet, I hope my few faithful readers will think that the reasons are as good as I do.  I’m back from what I now know was a much-needed trip to my birthplace: Iowa.  Jenn and I had planned to go up for a long weekend.  This was for her family, recently bereft of a beloved grandmother and only very recently able to gather for a proper memorial service.  However, it turned into a much more varied and exciting journey than we had originally expected.

The time everyone was able to come turned out to be the weekend after a ten-year reunion that my high school classmates had planned.  Neither of us had been to Harlan for at least the six years we’ve lived in Florida, so we decided to go up early for this shindig and enjoy some of the pleasures of late summer in Iowa.  Ten days later, I am convinced that the lifelong Iowan we came to mourn would have heartily approved.

The entire trip resonated with overtones of formative musical experiences that, for both Jenn and me, made Iowa a great place to grow up.  The town square is home to a relatively new restaurant, paradoxically called the Sandwich Bowl, where we had lunch and a long, soulful conversation with two of my former music teachers, Steve and Dianne Lawson.  Although they are now both retired from public school jobs, Dianne had to leave for an afternoon wedding gig.  We relaxed with Steve in a multi-purpose facility that provides his daily musical playground: he watches DVDs, plays music, teaches lessons, rehearses high school groups and engineers recording sessions.  I enjoyed the privilege of thanking the Lawsons in person for laying the foundation for many and varied other musical studies and experiences.

Later that evening, we met up with my high school classmates for the reunion.  Standard fare here: beers and steaks at a local country club.  It was a good time, but we cut out a bit early to stop by another reception for a friend and former bandmate who had been living in China.  His wife finally got her visa, and it was time to celebrate that victory and their marriage with his family.  It was surreal to see people I hadn’t seen in ten years and think about how I hadn’t been the only one who was half a world away, only to see them again here in our quiet Iowa hometown.  This called for more beverages.  The reunion had migrated to the downtown square, where we found my classmates and proceeded to close the oldest local bar in town.  They probably haven’t had a night like that since RAGBRAI came through town last year.

Above: cathing up with classmates and friends.  Thanks for taking the pictures, Jenn!

The next day we traveled to Jenn’s parents’ place, where I did what I always do when I show up there: set up the drum set in the basement.  My in-laws played a lot of dance jobs when they were first married.  Jenn grew up playing clarinet and saxophone, accompanied by her father on keys and either her mother or her brother on drums.  It’s a really rare vibe, a place where I always feel privileged to sit in on drums.  Moreover, with two other drummers in the family, there’s always some nice gear sitting around the house.  Knowing that I have been in Uganda and haven’t played any drumset for most of the last year, Steve came home for lunch ready to play a couple of tunes with me.

In the afternoon, we got back in the car to go to Okoboji, where Jenn’s father plays piano during the summer in the Dick Bauman Monday Night Big Band.  Bauman was the founder of a jazz program at a nearby community college and a good friend of the man who first taught me to play drumset, Steve Lawson.  Now this isn’t exactly the Village Vanguard or anything, but the sections are stacked with some of the best band directors in the state, and they are solid players.  There’s a tradition of good jazz in Iowa, and these people have sent some fantastic players on to the best college jazz programs in the country.  It was a privilege to sit in with the band,

The weekend brought other activities.  Jenn’s brother and his wife showed up on Friday, along with their aunt.  We wasted very little time after they arrived before jumping back in the car and heading to the world’s finest steakhouse.  Archie’s Waeside in LeMars, Iowa rivals many of the finest steakhouses in the country according to some, but we in Iowa know that you cannot buy a finer cut of meat, a tastier corn fritter, or a more delicious grasshopper sundae anywhere (a creme de menthe ice cream treat–not to be confused with these).  Wash that down with a selection of regional micro-brews, and you’ve got one tasty Friday night!

Saturday brought more chill time.  Jenn golfed with her folks and her brother.  She amazes me.  She hasn’t golfed but twice in the last eighteen months, and she was still able to par hole six and log several impressive drives.  Meanwhile, I shucked corn and prepared the grill to burn some bratwurst.  Guy Clark sings that there are “only two things money can’t buy: true love and homegrown tomatoes.”  Owing to the generosity of neighbors, I add Iowa sweet corn to that list, and we enjoyed all three with lunch on Saturday.

Jenn’s grandfather joined us for the occasion, and as is their custom, the Smith Family Variety Show followed.  Grandpa Jimmy worked as a saxophonist and singer during World War II and with his own dance band after that.  His repertoire has remained largely unchanged since: Peg o’ My Heart, Left My Heart in San Francisco, I Can’t Give You Anything But Love, Bill Baily…basically standards.  Seeing his son and grandson accompany him at family events has always been an indescribable joy.

What a privilege it is when they ask me to sit in on drums or sing a tune! That’s the story of our family gatherings in Iowa.  I think it’s an important story to tell, because it’s also the story of music education working in really interesting ways.  The democratic character of jazz filters organically into every musical event in Jenn’s family.

I’d experienced this atmosphere many times before, but somehow this time “When the Saints Go Marching In” seemed particularly poignant.  The next day, as we all drove to Des Moines to hold a memorial service for Jenn’s maternal grandmother, I looked through the Methodist hymn they had asked me to sing and my sister-in-law looked through the Debussy piece she was to play on flute.  It seemed somehow significant that this family of musicians had chosen to focus on mourning and ask the in-laws to provide appropriate music.  In death, as in life, this family welcomes such a beautiful range of expression, incorporating each unique voice into an ongoing performance that, if our generation and our children have anything to do with it, will never end. 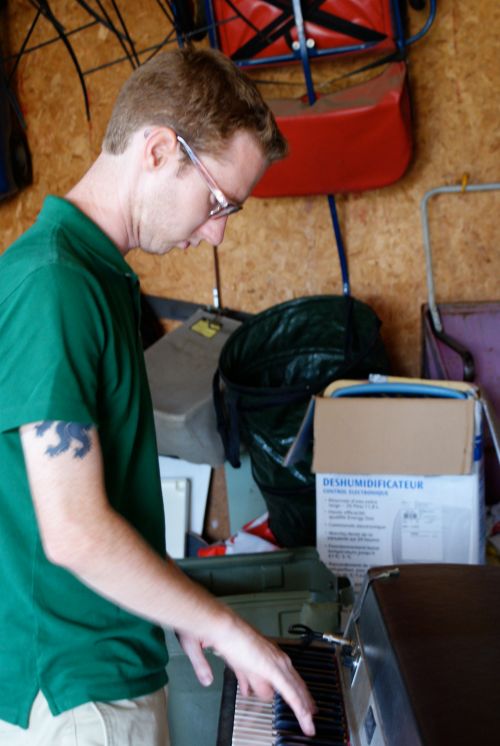 Chris picks up an old Rhodes from his pop to outfit his new digs in CO.

Where I’m Comin’ From

Now normally I would not send anyone, least of all my readers, to a really dodgy newspaper website.  However, this particular one happens to be my hometown rag.  The editor-in-chief is a drummer and a big fan of the jazz program in my hometown, so he always gives good coverage to the state championships, where the Harlan Band has been placing in the trophy class since they started that competition.  I am proud to say that I played drums in that band the first time they ever won Iowa Jazz Championships in 1999.  Congrats to another group of young Iowa jazz players, the Harlan Jazz Experience.

You may not hear from me for a few days for the same reason that my posts have been sporadic and short for the past couple of weeks.  I’m in the middle of writing my preliminary exams, after which I’ll be ABD!  Then it’s off to Uganda again . . . that link should keep you busy while I’m out.