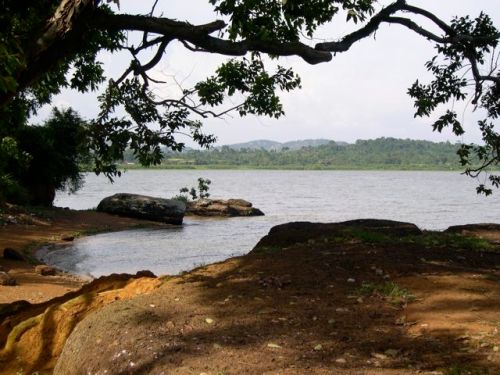 I’m just back from a few days of much-needed R&R at Lake Victoria.  My dear hosts, members of the Ffumbe Clan all, took me to Nalubaale (the Luganda name for the giant lake that feeds the Nile).  We had a really nice dinner on Christmas day and then left the following day for Nabinoonya Beach.  Incidentally, 75 degree weather by the lake isn’t that much different from sunny Florida this time of year.

We do Christmas dinner Kiganda style: on the floor with banana leaves for a table.  Here’s Maama and her house girl, a clanmate whom Maama and Taata took in as part of the family.  Her name is the female version of mine—Nakigozi—but I nicknamed her Nakinyonyi (basically meaning “Big Bird”) because she smiles a lot.  Oh.  Except in pictures.  People seem to have an aversion to smiles in pictures here unless prompted. 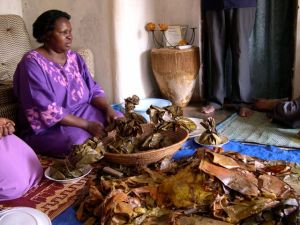 Anyway, dinner on the floor makes a fantastic mess.  Fun for the kids and all, but probably not so for Maama and Nakinyonyi, who might not be smiling because they put all of this together AND clean it up.  Three cheers for them!  I generally have two roadblocks to helping with such things: I’m a man and I’m a guest, and neither of those people usually helps out in the kitchen or with cleaning.  Still, I try to do what I can when nobody is looking.  Nakinyonyi still scolds me for it. 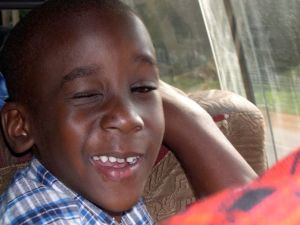 The beach is beautiful as we arrive.  Douglas Mugumya is pretty stoked up for several days of nonstop soccer (and I do mean nonstop).

Gloria just got her hair done before Christmas. 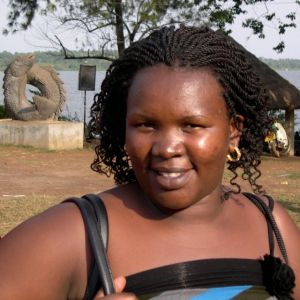 Mr. Magoba is in good spirits, wearing what I deem to be a typical “Dad” shirt: red plaid, but African style.  What a combination!  He wears it when he’s in relaxation mode.  Maama is decked out in her day-glo green quasi West African garb as she kneads dough for chapatti and the men sharpen sticks to roast meat.  Yum! 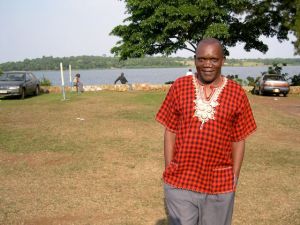 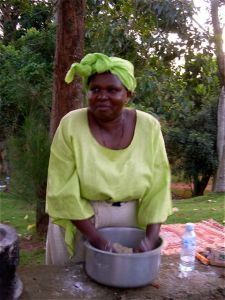 That’s my muganda (brother) Frank on the left and my kojja (mother’s brother) Vincent on the right. 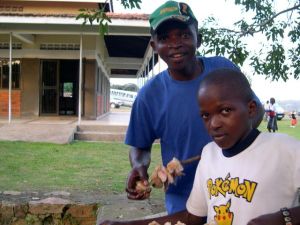 For a boy who’s allergic to meat, Vincent sure does like to butcher animals and roast meat.  I don’t get it; maybe he can sort of live vicariously through smell or something.  Maybe he doesn’t miss it at all.  I don’t get that either. Vegetarians escape my understanding.  I’m an omnivore (excluding readers, of course).

The rest of the weekend is totally fun.  There’s a dance party (meat-in-hand! What?) 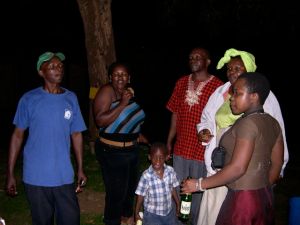 An elephant ride (well, sort of) 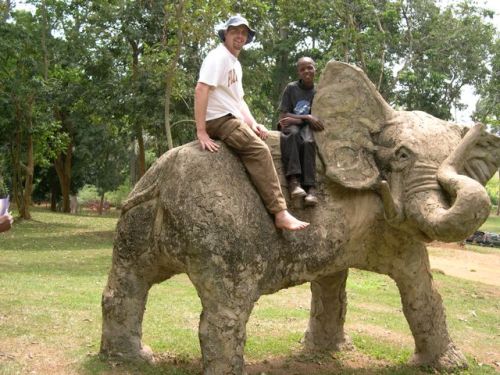 We butcher a goat (yes, that’s me stringing up a headless goat) and have a feast:

And there’s ample time to enjoy the lake (I insist on lake instead of beach and my Florida readers understand why, but it is truly beautiful here). We even see a couple of monkeys!  No good pix of that; those suckers are hard to capture on film! 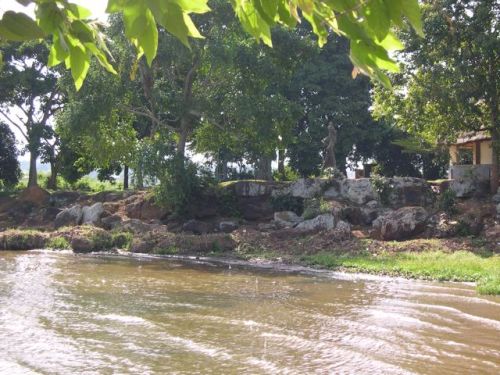 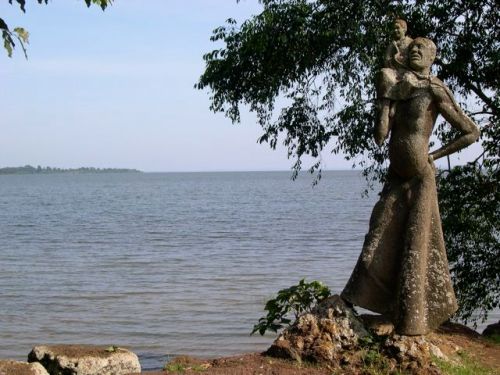 And now, a moment of Zen: goat haggis anyone? 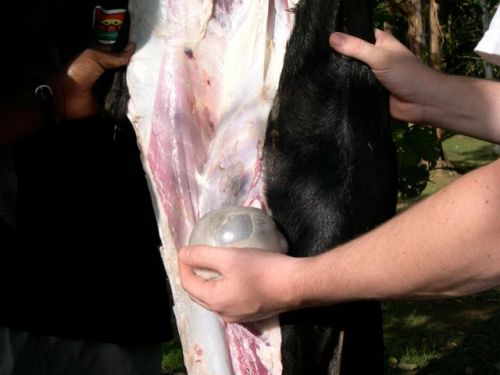