It was almost a year ago now that I posted about the meeting of Uganda n’eddagala Lyayo, the oldest healers’ association in Uganda, and their annual meeting at Mengo. This past weekend, I attended the annual meeting of one of Uganda’s youngest healers’ associations, the Lubowa Traditional Healers’ Association (LUTHA). I met their director last week, and he’s an incredibly warm young man named Hassan. I still cannot fathom why he wouldn’t have joined the much older association in his sub-county, PROMETRA, which has ties to an international NGO and great funding opportunities. Still, it seems this young group is building its own capacity for service to its community and potential for funding.

My preliminary trip to Walugondo village was meant to introduce me to this community and their musical activities. The rehearsal was a gas, complete with stilts! 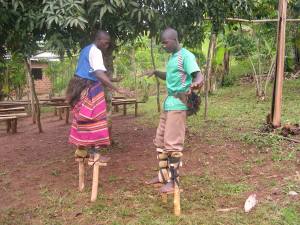 Some of us with a bit less experience even got some drumming time in: 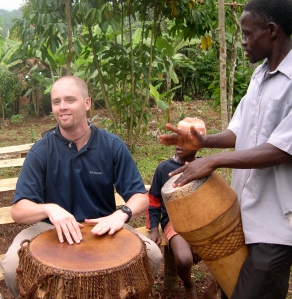 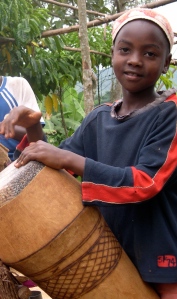 The later meeting on Sunday was a good opportunity to see how healers are aligning themselves with NGOs and local government authorities. After a lot of speeches and laments about the lack of government support for research and development of traditional practices, all present were glad to see an American researcher taking interest. Last year I attended meetings at the Ministry of Culture that made it seem like the central government would be more involved in regulating or at least researching these healers and their associations. However, a year on, it seems like they are less interested than local government officials would like them to be. These are the people who are indeed rooting out charlatans and ensuring the continuing good reputation of the healers who are legitimately trying to help their communities.

Speeches from the LC1 (village level) chairman and the LC5 (district level) chair and vice chair preceeded a speech by a Minister of Parliament. Whether they will stay committed beyond a small cash donation or attendance at this event remains to be seen. For the time being, however, it is enough for LUTHA to have garnered their attention. I hope to meet with the LC5 chair and vice-chair next week and ask them how exactly they use this kind of information, how they advocate for healers and their groups. A ride home with the Minister of Parliament gave me opportunities to ask similar questions of her. I think she genuinely wants to advocate for these folks before Parliament, but that body has its own regulatory agendas through the Ministries, so she has to work within those confines.

Ultimately, these associations link local dialectics of wellness, which music facilitates and articulates, with broader discourses on policy and the value of indigenous knowledge. They are valuable in this way, and they promise to continue in this role whether governments recognize them or not. Uganda has an under-utilized treasure here in that these are the people who provide primary medical care and support for a broad range of basic services that are as accessible as they are affordable for the general population. Moreover, these services are culturally relevant to the people. Can government bureaucratic appendages realistically expect to wrap their support around this in a way that doesn’t choke its creative fluitidy?