Some readers will remember the fantastic opportunity I got this winter to put some of my best field research photographs on view in large format as part of two exhibitions, one at the Arthur Rose Museum and a juried show off campus. The community where I collected those images–along with the footage for my documentary film, Birth of An Ancestor–is a place called Irondo Village. It’s in Namutumba District well east of the river Nile. It is a long trip to get there and not terribly easy to find, so I was unsure I would ever be able to go back. With 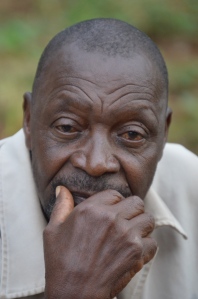 a little bit of luck and a few directions from the locals, we found this man sitting right in front of the house where I first met him in 2009.

At the time, Mzee Nabongho Francis Isiko was mourning his recently deceased wife of many years, a local healer named Lukoghe Bibireka Katirida. Mzee Isiko was among an enormously generous group of people who facilitated my documentation of his spouse’s funeral. I heard when I arrived that a family member had been there for the burial just a few days before and documented it similarly, but I have never seen the materials. In any event, the purpose of our jaunt there was to do some follow-up interviews with the healer who took over some of Katirida’s duties, some of the other local healers, and some other family members.

We began by showing Mzee Isiko and others the documentary in order to give them a better notion of what kinds of questions I’d like to ask. With a good deal of help from Mzee’s son, John Muyinda (below, middle, wearing a yellow shirt), we then made a list of the people who were both present at that funeral and still living in the area. We organized some transport for them, and agreed to meet them all the next morning.

After a long day of travel and a fairly successful overture to some people who hadn’t even laid eyes on me in five years, we headed back to Namutumba town to find lodging and food. Those were no problem. The bigger challenge was having no idea whether or not the roads would be passable by morning.

Alas, they were, but barely, and not until close to 11:00 the next morning. We set off just fine, got stuck only once, and happened to be right in front of a house where several young men were taking their morning tea. It was a stroke of luck for us: we needed the extra muscle to get unstuck!

The next great challenge of this work is that there’s really no such thing as an individual interview here. The old ubuntu concept–that a person is a person because of other people– is quite strong here. That can be really cool, but it also means that the notion of personal space or individual anything doesn’t really work. Everyone wants in on the fun.

This makes things a huge challenge for the cameraman (Ar’Darius, in this case), especially because he relies on me to hear what’s going on in the language and offer some cues. He did very well in a thoroughly confusing environment.

His highlight was fulfilling childrens’ wishes to have their photo taken and then showing them the results.

One response to “Old Friends in Irondo”